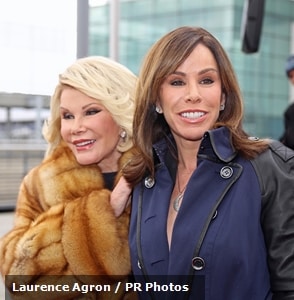 Melissa Rivers, daughter of the late comedian and talk show host Joan Rivers, is reportedly planning to file a wrongful death lawsuit against the surgeon who allegedly performed an illegal biopsy on her mother.

The 81-year-old Rivers had entered the Yorkville Endoscopy clinic in Manhattan last month for a endoscopy to help diagnose a sore throat and hoarse voice she had been struggling with. But according to CNN, after the procedure was completed, Rivers' personal physician, Gwen Korovin, then conducted a biopsy on her vocal chords — without having gotten her prior consent.

While a definitive link has not yet been conclusively proven, preliminary investigations indicate that "Rivers' vocal chords began to swell during the allegedly unauthorized biopsy, cutting off the flow of oxygen to her lungs, which led to cardiac arrest on the morning of August 29."

Even more disconcerting is that Korovin also reportedly took a "selfie" photo of himself and Rivers in the operating room, while she was still under anesthesia.

If proven true, these examples of negligence and misconduct will prompt Rivers' daughter, Melissa, to launch a medical malpractice lawsuit against Korovin and the Manhattan clinic. An independent litigator tells Examiner.com that while criminal charges would likely not be filed against the defendants, Melissa could stand to win tens of millions of dollars in a wrongful death case because her mother represented a substantial amount of her own income.

If you have ever lost a loved one to what you believe to be negligence or professional misconduct, schedule an appointment with the free consultation lawyers of The Meyers Law Firm right away. Our expert Kansas City attorneys can oversee your case in court and fight for any damages you may be owed.