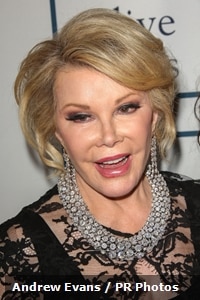 Last month, we shared with you that Melissa Rivers, daughter of the late comedian and talk show host Joan Rivers, was reportedly planning to file a wrongful death lawsuit in the wake of her mother's passing. That grievance was further substantiated this week when a newly released report from the New York City Medical Examiner's Office determined the official cause of death as brain damage brought on by lack of oxygen.

Rivers, who had been complaining of a sore throat, admitted herself to a hospital this past summer for a endoscopy of her vocal chords. After the procedure, though, Rivers' own physician, Dr. Gwen Korovin, allegedly performed an unauthorized biopsy. This allegedly incited new complications that stopped Rivers from breathing. The 81-year-old never regained consciousness again and died just a week later.

"The cause of Ms. Rivers' death is anoxic encephalopathy due to hypoxic arrest during laryngoscopy and upper gastrointestinal endoscopy with propofol sedation for evaluation of voice changes and gastroesophageal reflux disease," the NYC Medical Examiners Office said in its official statement. "The classification of a death as a therapeutic complication means the death resulted from a predictable complication of medical therapy."

What was particularly surprising about the investigators' toxicology report was the discovery of the anesthetic Propofol in Rivers' system, contradicting the Yorkville Endoscopy's claim that they never administered anesthesia during the operation. As Examiner.com notes, Propofol is the same anesthesia that led to Michael Jackson's death in 2009.

While Melissa Rivers had reportedly already been planning to file a wrongful death claim against both Korovin and Yorkville Endoscopy, alleging negligence and medical malpractice, the official cause of death adds even further weight to this claim.

If you have lost a loved one to what you believe to be a physician's negligence, contact The Meyers Law Firm. Our Kansas City attorneys will handle your case with the utmost care and fight for any damages you may be owed.