Abercrombie and Fitch discrimination lawsuit headed to the Supreme Court 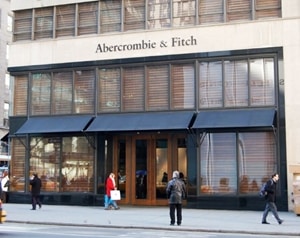 Earlier this month, the Supreme Court added an employment discrimination case involving Abercrombie and Fitch to its docket. The suit, filed by teenage job applicant Samantha Elauf, alleges that the store denied the young Muslim woman employment because her hijab violated the company's so-called "Look Policy."

According to MSNBC News, Abercrombie and Fitch stipulates that its floor staff adhere to a certain look beyond just wearing typical uniforms. The employees — called "models" by the store — are prohibited from wearing hats or black clothing, and are even graded by managers on a scale of one to three based on "appearance and sense of style." Elauf had initially been graded a two, but this was subsequently reduced to a one by a district manager when he learned that the teen wears a hijab. This drop automatically disqualified Elauf from consideration for the job.

In response, the U.S. Equal Employment Opportunity Commission (EEOC) filed an employment discrimination lawsuit on behalf of Elauf, claiming that an employment policy that discriminates against religious clothing violates Title VII of the Civil Rights Act, which protects employment status "on the basis of 'race, color, religion, sex or national origin.'" Additionally, the EEOC contends that Elauf was never even made aware by employers that wearing a hijab would violate a store policy, and that that kind of expectation "puts an impossible burden on employees."

"Job applicants cannot be expected to request an accommodation when they are unaware that a conflict exists," the commission stated.

If you believe you have been discriminated against by an employer because of your religious beliefs or other personal characteristics, contact The Meyers Law Firm. Our expert employment discrimination lawyers will handle your case in court and fight for any damages you might be entitled to.