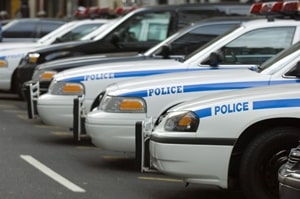 Nine months ago, ex-Irondale​, Alabama, police officer Cedric Coleman quit his department after allegedly experiencing a series of racially motivated threats, including finding pictures of black men in chains stuffed into his locker and receiving texts calling him the n-word. He's now suing his former department.

In the words of his attorney, "Basically he feels like he shouldn't be mistreated in the workplace environment. Everybody should be treated the same. There should be no racial discrimination, no bigotry, no threats. He took this as a threat. And I think it's a legitimate threat."

Before quitting, Coleman tried on multiple occasions to get his department to address the threats. However, despite bringing strong evidence to the Equal Employment Opportunity Commission (EEOC) last July, none of his fellow officers were disciplined. While the commission failed to find any clear rule violations in their investigation, they admitted that the evidence was inconclusive and agreed that Coleman had the right to sue the town.

Following his meeting with the EEOC, Coleman spoke with both the Irondale mayor and police chief. Not only did the two refuse to take any action on his complaints, but following his meeting, the screensavers on department computers were changed to be racially offensive.

Coleman is currently seeking an order stating that the town and department's practices and policies violated his rights, as well as damages and attorneys' fees.

Racial discrimination remains one of America's biggest social justice issues. If you believe you've been treated unfairly because of your race, send your claim to our workplace discrimination attorneys here at The Meyers Law Firm. Our staff will review your case and help you determine your best course of action.