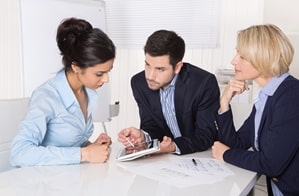 Five current and former female sales reps for Merck & Co. have filed a gender discrimination lawsuit, accusing the pharmaceutical company of fostering a "boys' club" atmosphere in the workplace that marginalizes and harasses female employees.

The lawsuit, which seeks $250 million in damages, alleges that Merck lavishes greater promotions and pay raises on the men in its workforce than the women. One example cited by the complaint claims that a sales rep who had been with the company for nine years was both demoted to an entry-level position and denied an award because she went on maternity leave. Another plaintiff contends that Merck doles out much smaller salary increases for women compared to the male employees, who are characterized as the "breadwinners" of the company.

While Merck attempted to have the lawsuit thrown out, a federal judge has ignored that request and agreed to let the sex discrimination complaint proceed in court.

"In his ruling, U.S. District Court Joel Pisano decided the women made plausible arguments for the case to proceed and determine whatever discrimination took place," reports The Wall Street Journal. "He also accused Merck of being 'premature' in seeking to dismiss the case, given that 'hardly, if any, discovery has been completed and there has been little to no evidence… to evaluate the merits' of the claims seeking class-action status."

If you have ever experienced discrimination in the workplace before because of your gender, age, race, religion or any other personal characteristic that has no bearing on job performance, schedule an appointment with The Meyers Law Firm's free consultation lawyers right away. Our expert attorneys can assess what kind of restitution you may be owed.