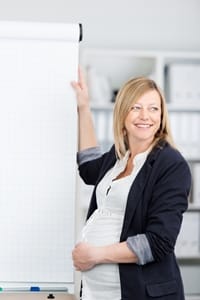 After discovering she was pregnant in 2006, UPS employee Peggy Young asked her doctor for a note outlining specific work restrictions she might need to adhere to in order to ensure the safety of her unborn child. The doctor recommended that Young not lift anything greater than 20 pounds for her first two trimesters. Upon submitting this note to her supervisor, UPS put Young on unpaid leave, telling her that medical accommodations for lighter duty don't apply to "an 'off-the-job' condition" like pregnancy, according to The Huffington Post. This sudden loss of income forced Young to place herself on her husband's health insurance.

Young filed a discrimination lawsuit against her old employer and now, eight years later, the case has moved all the way to the Supreme Court. But as the Huffington Post notes, the package delivery company is now having to defend a policy that it no longer promotes.

"In a memo sent to employees this week, the company announced that it will begin offering light duty to pregnant workers on Jan. 1," the source writes. "The turnaround puts UPS in the peculiar position of defending before the Supreme Court a policy that it is already walking away from."

In an official statement, UPS spokeswoman Kara Gerhardt Ross defended their position, saying that the company's initial policy was "pregnancy neutral," and that it did not specifically single out pregnant employees but instead was only obligated to provide light duty accommodations for conditions recognized as "a cognitive disability under the Americans with Disabilities Act" — which does not include pregnancy.

While UPS is now rolling back that policy and taking steps to offer lighter duty to its pregnant employees, it's far from the only employer in the U.S. that has discriminated — or continues to discriminate — against pregnant women in the workforce. If you believe that you or a loved one falls into this category, contact The Meyers Law Firm for employment discrimination lawyers that can fight for compensation you may be owed.