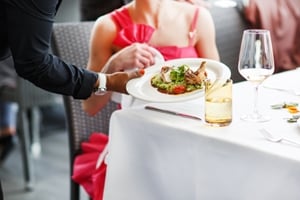 The Baltimore Sun reports that the U.S. Equal Employment Opportunity Commission (EEOC) had first filed the complaint back in 2008, alleging that the restaurants had been discriminating against black employees and job applicants by refusing to appoint black workers to "front-of-the-house positions" like servers and hosts. The EEOC lawsuit contends that this discrimination represents a clear violation of the Civil Rights Act of 1964.

Although the owners of the restaurants insist there was no act of discrimination or wrongdoing on their part, they've agreed to pay out $1.3 million in owed wages to black workers and applicants, as well as set benchmarks to ensure fairer hiring practices.

"Fifty years after the passage of the Civil Rights Act of 1964 the EEOC remains as firmly committed to combating race discrimination in the workplace as the day we opened our doors," P. David Lopez, General Counsel for the EEOC, said in an official statement. "We are pleased we were able to resolve this important case on mutually acceptable terms."

Over the next two years, the EEOC will manage a claims process to "identify eligible recipients for the $1.3 million" settlement, as well as oversee "targeted recruitment efforts" aimed at black applicants and "implement numerical goals for [the] hiring of black job applicants for front-of-the-house positions."

If you are currently experiencing discriminatory harassment in the workplace, or believe you were discriminated against during the application process — whether on grounds of race, sex or age — contact the employment discrimination lawyers of The Meyers Law Firm right away. Our expert legal counsel will work with you to help win the damages you may be entitled to.