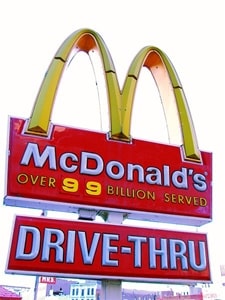 Although it prides itself on over 99 billion served, the prolific fast-food chain McDonald’s is now itself being served a lawsuit from ten of its former employees.

Reuters reports that nine African-American and one Hispanic worker that had previously been employed at three McDonald’s franchises throughout Virginia have filed a lawsuit against the company, alleging “rampant racial and sexual harassment” and wrongful termination by the restaurants’ supervisors. According to the complaint, the supervisors in question had said the African-American employees were making their restaurants “too dark” and that they had to be fired in order to “get the ghetto out of the store.”

A female employee also contends that she and others were touched inappropriately by a supervisor, who also sent them naked photos of himself. Although she filed a complaint with the McDonald’s corporate office about their supervisor’s behavior, she never heard back.

While this behavior occurred in three of McDonald’s franchised restaurants, the lawsuit alleges that the company “has control over nearly every aspect of [their] operations, including hiring, firing, wage-setting, scheduling, training and discipline.” Consequently, the lawsuit names the McDonald’s company among the defendants as well. Depending on the outcome of the case, this could have ripple effects on how other industry chains — such as restaurants, hotels and construction firms — bear responsibility for their franchises.

The source did not disclose how much the plaintiffs are seeking in damages.

If you’ve suffered racial or sexual discrimination and harassment at work, contact The Meyers Law Firm right away. No employee should ever be subjected to that kind of behavior from a supervisor, and if you have, counsel with our expert attorneys for a chance at winning any compensation you might be owed.