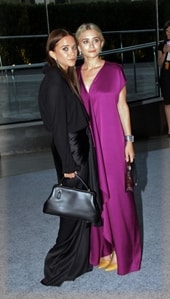 Shahista Lalani, a former intern at Mary-Kate and Ashley Olsen's licensing and manufacturing company, Dualstar Entertainment Group, has filed a class action lawsuit against the Olsen twins, claiming that she and other interns were forced to work unpaid, 50-hour work weeks, and that the company relied on these unpaid efforts to cheaply run its business. The suit estimates that over 40 other unpaid interns will be eligible to join.

Specifically, Lalani claims that she and the other interns were misclassified as exempt from minimum wage requirements. According to the federal Fair Labor Standards Act , internships at for-profit companies are allowed to be unpaid if the internship is done primarily for the intern's benefit, and provides a function "similar to training which would be given in an educational environment."

In Lalani's and other interns' experience, this hasn't been the case. According to the suit, she generally spent her 50-hour week "inputting data into spreadsheets, making tech sheets, running personal errands for paid employees, organizing materials, photocopying, sewing, pattern cutting, among other related duties." Lalani added that her supervisor "was very demanding. I was doing the work of three interns. I was talking to her all day, all night. Emails at nighttime for the next day, like 10 p.m. at night."

A representative from Dualstar argued against Lalani's claims, insisting that the company has followed labor laws to the letter.

If you believe that you've been treated unfairly in the workplace, contact the expert employee rights lawyers at The Meyers Law Firm today. Our staff will review your claim, and help you determine your best course of action for bringing your situation to justice.