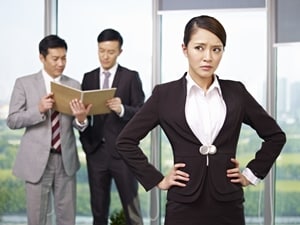 A Pennsylvania jury has awarded German Township resident Sandra Robertson $13 million in damages for incurring routine gender discrimination and harassment in the workplace.

The Pittsburgh Post-Gazette reports that for over six years, Robertson faced a slew of insults and discriminatory behavior from her male colleagues at a Hunter Panels plant in Smithfield, where she works as a shipping supervisor. As the source notes, the derogatory remarks ran the gamut of belittling her for her 6-foot-tall height, making obscene gestures at the sound of her voice over the company radio and even hand waving away her complaints about said harassment as simply "losing her mind" and "throwing fits."

Compounding all of this was the fact that Robertson was being paid less than her predecessor, despite coming into the job with 20 years of relevant experience from her supply specialist position in the Air Force.

"I'm former military, and I can take a joke. But things started to turn really ugly and then I noticed it wasn't stopping," Robertson told the Post-Gazette this week. "It just kept getting worse, and management pretty much condoned it."

After working for Hunter Panels from 2006 to 2012, Robertson was fired for alleged "job performance and 'management style,'" ultimately prompting her to file a gender discrimination lawsuit against the company. But while the litigation was pending in court, the 48-year-old woman began to lose weight, grow depressed and fail to secure a new job because she had to reveal to potential employers that she had been fired.

A federal jury sided with Robertson's complaint, awarding her $13 million in damages, the largest such sum for employment discrimination ever seen in western Pennsylvania.

If you've suffered routine harassment and discrimination at work because of your gender, age, race or other personal background characteristics, schedule an appointment with The Meyers Law Firm. Our employment discrimination lawyers can assess your claim and fight for any compensation you may be owed.