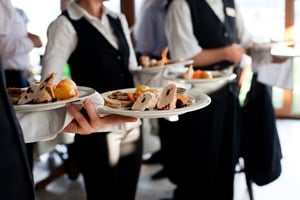 The provocatively named report, "Ending Jim Crow in America's Restaurants: Racial and Gender Occupational Segregation in the Restaurant Industry," reveals that wage earnings for women and people of color were, on the whole, nearly 56 percent lower than white workers with equal qualifications. White men working in restaurants in California were found to be disproportionately more likely to work in "front-of-house" positions at more expensive restaurants than their non-white and female counterparts, while earning $14.18 an hour. White women were found to earn $11.30, men of color $11.63, and women of color earned $10.13. Women working in "back-of-house" positions — which often includes kitchen or cleanup jobs — made the least amount of money, coming in at only about $9.93 on average.

"It's certainly not a coincidence that the largest employer of people of color is also the absolute worst paying industry in the country," says Saru Jayaraman, founding co-director of ROC United. "And while we know that the restaurant industry can do better, the very limited living-wage jobs available within the restaurant industry are systematically off-limits to people of color and women."

In spite of these findings, most restaurant owners and managers claimed to have no problem with bias — while also using coded language when describing candidates as "clean-cut" and having "the right look."

The Meyers Law Firm is here to help if you have been the victim of discrimination or harassment in the workplace due to your race, sex, disability or age. Contact our free consultation lawyers today to get started.