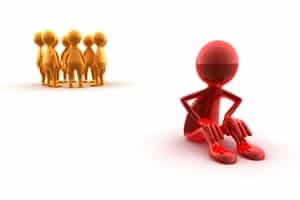 A new Harris Poll survey commissioned by the American Psychological Association — the results entitled "Stress in America: The Impact of Discrimination" — has revealed a truth that could be considered both obvious and shocking: Acts of discrimination are a leading cause of stress in the workplace.

"Acts of discrimination are a leading cause of stress in the workplace."

The study found that about 70 percent of U.S. adults have at one point encountered some form of discrimination, with nearly 61 percent reporting having experienced discrimination on a daily basis.

"It's clear that discrimination is widespread and impacts many people, whether it is due to race, ethnicity, age, disability, gender or sexual orientation," said Jaime Diaz-Granados, the APA's executive director for education, when speaking to Inc. "When people frequently experience unfair treatment, it can contribute to increased stress and poorer health."

The study tracked a rise in average stress levels among U.S. adults, with 24 percent of those surveyed reporting they were more likely to feel "extreme stress" — up from 18 percent in 2014. Hispanic men reported the highest stress levels, coming in at 5.9 on a 10-point scale compared to the 5.1 average for all adults.

Black adults reportedly were the most likely to feel discriminated against, with over 75 percent saying they encountered discrimination every day. They also reported feeling pressure to monitor or modify their appearance so as to get the same quality of service as their white peers.

"Stress takes a toll on our health, and nearly one-quarter of all adults say they don't always have access to the health care they need," commented Cynthia Belar, the APA's interim CEO speaking to Inc. "In particular, Hispanics—who reported the highest stress levels—were more likely to say they can't access a non-emergency doctor when they need one."

If you have felt discriminated against for your race or ethnicity, you should speak to a work discrimination lawyer today. Contact The Meyers Law Firm to get started.