The secret effects of harassment and discrimination 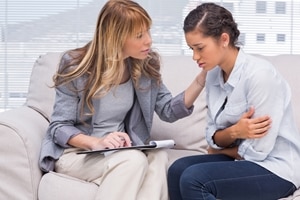 Discrimination and harassment in the workplace can have insidious effects on the target, often beyond the obvious. While wage disparity and being passed over for promotions stem directly from the discrimination, new research shows that the victims of harassment and discrimination may suffer health effects as well.

"If you don't get a job and you're left to wonder whether it had to do with your race or gender, that can have an impact on your mental health," said Dr. Gilbert Gee, a professor in the Fielding school's Department of Community Health Sciences.

UCLA researchers have unveiled a study documenting the link between discrimination and higher rates of mental illness and anxiety.

"We now have decades of research showing that when people are chronically treated differently, unfairly or badly, it can have effects ranging from low self-esteem to a higher risk for developing stress-related disorders such as anxiety and depression," said Dr. Vickie Mays, a UCLA Fielding School of Public Health professor. "For example, it can affect parenting — a depressed mom might not be able to interact with her child in a way that best promotes that child's development, leaving the child more vulnerable to certain behavioral disorders. In that sense, we all suffer from the effects of discrimination."

While the study focused primarily on the mental health impact of racial discrimination on Asian-Americans, subsequent studies have documented the links with the African-American and Latino populations as well. A 2014 study showed that Latinos that had been subject to discrimination showed an increased risk for alcohol abuse among women and increased risk of drug abuse among men.

Over time, the effects of discrimination may even change the fundamental way that the brain processes information, disrupting useful decision-making and planning.

"When we've had these experiences and anticipate that other incidents might lead us to be discriminated against, it can interfere with our ability to cognitively function at our best," Mays said.

The study's authors have urged an increased effort to identify and stamp out discrimination in the workplace from a public health perspective, citing that mental health and anxiety disorders cost taxpayers millions every year. When screening for mental disorders, health care providers are encouraged to explore the experiences of those afflicted and ask them about their "experiences with discrimination."

The employment discrimination lawyers at The Meyers Law Firm want to hear from you if you feel you have been the victim of discrimination based on your race, gender, or any other protected status, we can help.