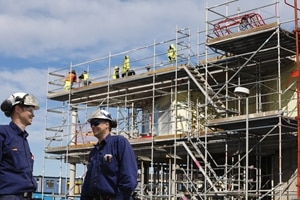 Fort Myer Construction Corp. has reached a settlement in a lawsuit alleging racial and gender discrimination against more than 400 employees and job applicants. The complaint, filed by the U.S. Department of Labor's Office of Federal Contract Compliance Programs (OFCCP), alleges that throughout 2010, the Washington, D.C., construction firm had filtered out over 150 qualified candidates solely because of their race or sex, and had also wrongfully fired another eight employees on racial grounds.

According to the OFCCP lawsuit, Fort Myer Construction terminated eight African-American workers and denied job opportunities to another 136 African-Americans, as well as 27 women, despite their qualifications for the positions. The employer was also accused of rigging pay rates that discriminate against minorities, charging the company with paying white employees higher wages for the same amount of work — and sometimes with fewer hours — compared to minority workers with the same schedules and responsibilities. The complaint alleges that this practice repressed wages for 156 Hispanic employees and 44 African-American laborers.

"Strong enforcement and vigilance are critical to opening doors of opportunity for more women and minorities in the construction industry, ensuring that all workers get an equal shot at getting to work on the highest-paying projects," said Patricia Shiu, OFCCP Director, in a September 17 press release.

As part of the agreed-upon settlement, Fort Myer Construction will pay out $900,000 in owed wages and accumulated interest to 317 of the plaintiffs. The firm will also extend employment opportunities to 30 of the affected African-Americans and seven of the female plaintiffs once new laborer positions open up.

If you believe you have been discriminated against in the workplace or wrongfully terminated because of your age, sex, race or religion, contact The Meyers Law Firm right away. Our expert employment discrimination lawyers will oversee your case in court and fight for the damages you may deserve.