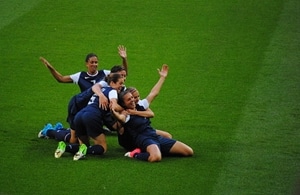 This summer, millions of soccer fans around the world tuned in excitedly to watch their country compete in the World Cup. In spite of the tournament, though, 2014 has not been a good year for the sport's international governing body, FIFA. Not only has the organization suffered intense scrutiny for its controversial decision to host the 2022 World Cup in Qatar, it has come under fire from some of the world's top women soccer players — criticism that has since turned into a full-fledged gender discrimination lawsuit.

NBC Sports reports that the litigation was prompted by FIFA's decision to use artificial turf, rather than real grass, for the 2015 Women's World Cup. The plaintiffs — who include some of FIFA's own World Players of the Year, such as Abby Wambauch, Nadine Angerer and five-time title holder Marta — allege that the organization would never force men to compete on turf for a World Cup tournament, and that women should be allowed to play on natural grass too.

"It's very disappointing that FIFA hasn't really even acknowledged or given us any response to our statement," U.S. soccer player Alex Morgan told the news source. "It seems like CSA [Canadian Soccer Association] and FIFA are kind of playing the blaming game. So we would like some sort of response and some sort of explanation, because I feel like it is taking a step backwards so hopefully we get the explanation sooner rather than later."

No matter what your job — professional athlete, construction laborer or office worker — you deserve to be treated fairly and equally in the workplace. If you believe you're the victim of gender discrimination, contact the employment discrimination lawyers of The Meyers Law Firm for expert legal representation.