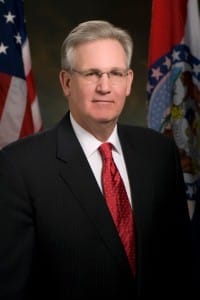 As Missouri's 2012 legislative session came to a close on Friday, May 18, lawmakers on both sides of the aisle stopped to assess gains made and losses suffered.

Unfortunately, the agenda of business interests, which they labeled "Fix the Six" would have made it easier for employers to fire Missouri workers, who are already bearing the brunt of the economic downturn caused by irresponsible corporate practices.  The “reform” of Missouri discrimination laws, which the legislature passed in March, would have made it harder to hold employers accountable for wrongfully terminating employees.  The legislature also passed workers' compensation legislation.

Fortunately, Governor Jay Nixon vetoed the two bills that would weakened protections for employees against unlawful discrimination law and for on the job injuries under workers' compensation.

The first measure would have required persons suing their employers for discrimination to prove the unlawful motive was more of a "factor" in their treatment than under current law. If signed into law, the bill would have prevented employee discrimination lawyers from taking legal action on behalf of employees who couldn't meet that higher burden.

The second measure called for occupational diseases to be included under the workers' compensation exclusivity provision. In a letter to the secretary of the senate, the governor wrote that allocating occupational diseases to workers' compensation would prohibit employees from seeking "broader redress" against their employers through "the civil justice system," a right they deserved due to the seriousness of their ailments.

Senate Republicans have not sought to override the governor's veto on either bill this session. However, on May 15 they did pass a co-employee liability act that limits an employee's ability to sue co-workers over personal injuries. The bill now goes to Governor Nixon, but this time senate Republicans don't predict any issue, reports David Lieb of The Associated Press.

Anyone considering taking legal action against their employer should consult a Kansas City lawyer with a knowledge of current legislation. An experienced work discrimination lawyer will be able to determine if you have a legitimate case.