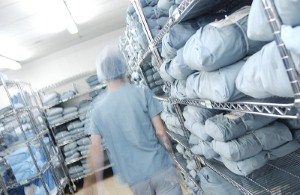 Dr. Andrew Sibley, the interim Chief Medical Examiner in Oklahoma, was fired on July 12 for breaching violence and weapons rules in the workplace. Sibley admits that he brought a brought a pocketknife to work and even flipped it open a few times, but he says that he never did so with the intention to hurt anyone.

''Oh, my God, that’s absurd,'' Sibley said of the weapons allegations made against him, according to NewsOK. ''These people, they just want me out is all. … They’re stretching things.''

But, that's not all. Following an investigation that took place by the Oklahoma Bureau of Investigation before he was fired, it was revealed that Sibley was once named in a sexual harassment lawsuit in Tucson, Arizona.

''The record independently established that other employees were repulsed by the behavior of Dr. Sibley and the techs…to the degree that they would seek to avoid them, change their manner of dress and/or complain directly to them about their behavior,'' read a Pima County, Arizona, human resources department report, according to The Oklahoman.

After that revelation, one female employee at the Tulsa Medical Examiner's office came forward and alleged that she was also a victim of Sibley's inappropriate behavior. She told investigators that it wasn't uncommon to find pornography Sibley had downloaded on the morgue computer.

The unnamed worker said she was also harassed by the doctor on a routine basis. During the investigation, the woman also told a grand jury that the doctor usually made sexual comments to her about the dead people he was examining during the autopsies.

Sibley did not make a public statement regarding the sexual harassment charges against him.

Harassment in the workplace is never acceptable. If you have been a victim of this type of inappropriate behavior and live in Missouri, you may benefit from a consultation with a lawyer in Kansas City. These locally based and experienced professionals can assess your claim, try your case in court and help you recover damages that you may be entitled to.