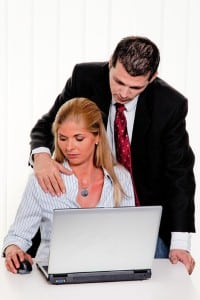 On Monday, September 10, the U.S. Equal Employment Opportunity Commission (EEOC) filed a sexual harassment and retaliation lawsuit on behalf of Deborah Chisholm, a former employee of Trinity Medical Center in Rock Island, Illinois. The complaint was filed in a U.S. District Court.

Chisholm, who began working at Trinity in 1989, says that she was exposed to "hostile, abusive and lewd comments [from a fellow employee] and had complained repeatedly to management." However, according to the EEOC's website, the medical center purportedly took no steps to put an end to her colleague's behavior.

On several occasions, the unnamed coworker allegedly made her look at photos of naked women, referred to her breasts in a derogatory manner and recorded a sexual voicemail on his mobile phone, which he later played in front of workers at Trinity.

Although sources indicate that the colleague was fired at the beginning of 2010, it's also important to note that Chisholm was let go just a few days after he was terminated.

"Employers ought to learn from this  case. Any employment discrimination problem – sexual harassment or anything else – can always be made worse and more injurious to the conduct of the employer's business," said the plaintiff's attorney, according to the site. "Retaliation is  guaranteed to do that.  It never makes sense,  it is never good for business, and it is always illegal."

The former employee is seeking, among other things, back pay and compensatory damages.

If you have been wrongfully terminated or the victim of sexual harassment and live in Kansas, you may benefit from a consultation with a lawyer in Kansas City. These experienced and locally based professionals can assess your claim, try your case in court and help you recover damages that you may be entitled to.