Arizonans who lost homes to wildfire now suing the state 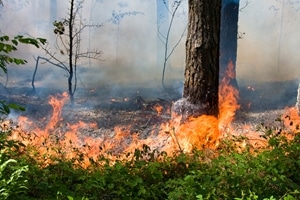 A group of Yarnell, Arizona, property owners who lost their homes in a blaze that also killed 19 firefighters are suing the state, in an attempt to prevent similar future tragedies. They accuse the Arizona State Forestry Division of failing to properly manage the incident response, leading to the deaths of the Granite Mountain Hotshots and the destruction of more than 100 homes.

"If the Arizona State Forestry Division had competently managed, contained and suppressed the Yarnell Hill Fire, no member of the Granite Mountain Interagency Hotshot Crew would have died," the suit states, as reported by Reuters. "And Yarnell and its people would have escaped devastation."

The group of more than 160 homeowners is seeking unspecified damages for lost property and emotional distress. Their attorney is also representing the mother of one of the 19-year-old firefighters who died in the blaze, according to The Phoenix New Times.

The suit also seeks to prevent such tragedies from occurring again, by changing the way the state approaches wildfire management. The New Times reports that the civil complaint asks for an injunction requiring that residents be properly warned of fires and that firefighters be given GPS units and more sophisticated fire shelters.

If you or your family member has been the victim of a natural disaster in Missouri, and you believe that a state agency is partly to blame, you may have the right to seek damages and should contact experienced personal injury lawyers as soon as possible. Call the free consultation lawyers of Meyers Law Firm for an assessment of your claim and a chance at recovering any civil damages to which you may be entitled.