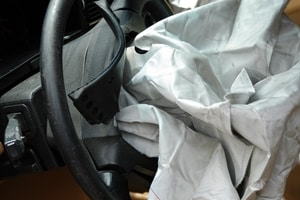 The family of a South Carolina woman who died after her car's air bag "deployed with excessive force" has filed a wrongful death lawsuit against the auto parts manufacturer Takata Corporation.

The National Law Journal reports that back in 2008, the 57-year-old victim was driving a 2002 Honda Accord that ran off the road and crashed into a mailbox and tree. The collision prompted the air bag to deploy, but reportedly to such an extent that it actually exacerbated the driver's injuries, including brain and spinal trauma and respiratory failure. The woman succumbed to her injuries just 18 days later.

This incident is the first such lawsuit to be filed since Takata Corp. began recalling vehicles for defective air bags. In fact, just one day before the lawsuit entered federal court, Hiroshi Shimzu, Takata senior vice president of global quality assurance, made his first appearance before a Senate committee hearing wherein Senators "pressured Takata to conduct an independent investigation into the defect," the Journal reports.

"Honda and nine other auto companies have recalled 7.8 million U.S. cars and trucks worldwide over a defect that could cause Takata air bags to explode, pelting drivers with metal shrapnel," writes Amanda Bronstad for The National Law Journal. "More than 30 lawsuits have been filed against Takata and several of the auto companies, including Honda […] alleging that Takata and Honda knew of the defect as early as 2001, but at least two have been filed in federal court for injured drivers."

If you or a loved one has sustained injuries — or worse — from what you believe to be a defective product, and need to find a personal injury attorney to represent your case, contact The Meyers Law Firm. Our expert injury lawyers will deftly handle your case and fight for any compensation you may be owed.