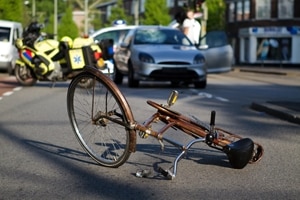 After being denied an initial personal injury claim for a bicycle crash, Theodore Orean is now suing the city of Grand Rapids, Michigan for damages.

The accident, which occurred in June of 2013, happened when Orean rode his bike into a missing section of sidewalk and broke his hip. He required surgery for his injuries.

According to Orean, "One large slab of sidewalk was missing with just a cone in it. My front tire hit and I flipped over. There was nowhere to go: major street on left and fence on right." His lawsuit goes on to claim that "no signage or barricades had been erected to warn of an impending danger."

A witness, Matt Hoeksema, agrees with the lawsuit, saying that there weren't any visible warnings, and saying that, had he been in Orean's situation, he too would have likely crashed his bike.

The city denied Orean's claim in October of 2013, saying that, while it was unfortunate that he was injured, the city was in the process of fixing and maintaining its sidewalks, and as such, could not be found liable for his injuries. Catherine Mish, a city attorney for Grand Rapids, added that it's against the law to ride a bike on the sidewalk downtown. The accident in question, however, occurred outside the jurisdiction of that law.

Orean is now formerly suing both the city of Grand Rapids, as well as Hout Concrete Construction Inc., the company responsible for the sidewalk in question.