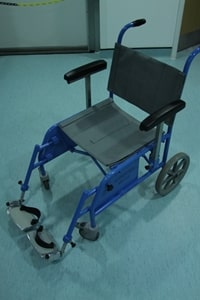 A personal injury lawsuit filed by a California resident that was once dismissed by a judge has been revived. According to Reuters, San Francisco native and plaintiff Michelle Gilstrap originally submitted her complaint in a Los Angeles court, where it was initially thrown out. However, an appeals court overturned that decision and the case is going back to trial.

Gilstrap alleged that representatives from United Airlines, which is a subsidiary of Continental Holdings Inc., yelled at her for requesting a wheelchair and denied her access to one. Because she suffers from osteoarthiritis, it's often difficult for her to stand for extended periods of time or walk. In 2008 and 2009, the plaintiff claimed the airline did not provide her with a chair. She also accused United of questioning the true nature of her disability.

In an email to Reuters, a spokeswoman for United declared that the company is "strongly committed to providing equal treatment and quality service to our disabled customers."

One of the big questions that was discussed after the plaintiff submitted her court papers was whether people should be able to sue for damages they endured on an airplane or in a terminal. Although a judge said no the first time, that has since changed.

"This is a really big deal for disabled Americans across the country," Gilstrap's personal injury lawyer Mark Meuser said.

No word has been released as to when the trial will begin.

If you live in Missouri and have been hurt because of someone else's negligence, you may want to think about finding a personal injury lawyer. These experienced and locally based professionals can assess your claim, try your case in court and help you recover damages you may be entitled to.