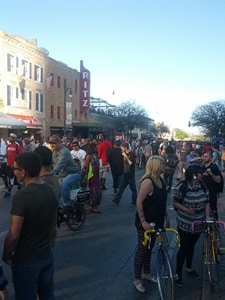 Every March, hundreds of thousands of people flock to Austin, Texas, for the several days-long film, music and technology festival, South by Southwest (SXSW). This annual entertainment and tech celebration took a tragic turn this year though, when a man drove through a barricaded area of the festival, crashing into a crowd of people and killing four concert-goers. Now, nine months later, victims and their families are beginning to file litigation — including wrongful death lawsuits — against the SXSW organizers.

According to CBS News, the complaints allege that festival organizers were negligent in monitoring crowd control measures and alcohol consumption, resulting in overly crowded venues "where public safety could be compromised."

The driver responsible for the incident, Rashad Charjuan Owens, had been fleeing police in order to avoid a traffic stop when he drove through a festival barricade on Red River Street and into hundreds of people. In addition to the four who were killed in the crash, approximately two dozen others were injured. Owens has been in prison since March on capital murder charges. His blood alcohol content at the time of the incident was .114, significantly higher than the Texas legal limit of .08.

"What happened on Red River was a terrible tragedy, caused by Rashad Owen's utter disregard of human life," said SXSW in an official statement. "Our hearts continue to ache for those injured and the families of those who lost their lives. We look forward to his prosecution for his awful crimes."

The amount of damages being sought in these lawsuits was not disclosed.

If you have ever lost a loved one to what you suspect to be negligence or insufficient safety precautions on the part of a third-party, reach out to The Meyers Law Firm for an expert accident attorney that will fight vigorously for the restitution you may be owed.