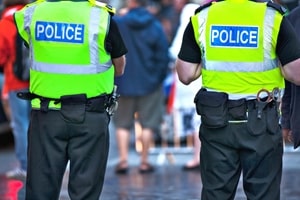 For the second time this month, the Enfield, Connecticut, police department finds itself the subjection of litigation — this time a wrongful death lawsuit.

According to the Connecticut Law Tribune, a local legal news publication, a 20-year-old man incurred a traumatic brain injury from a car crash, leading to feelings of anxiety, distress and ultimately suicidal thoughts. Worried about him, the man's grandmother called the Enfield police department and requested that officers help transport her grandson to a hospital for care. She also stressed that her grandson did not present any threat and had to be treated delicately so not to "jostle his head" and exacerbate his condition. When officers Matthew Worden and Jamie Yott arrived at the house, she even took them aside to confirm that they had been given those instructions.

"They said they understood and said they would treat him with great care," the family's attorney told the source. "That's not what happened."

The man's family claims that Worden and Yott used a taser on the 20-year-old's head, tackled him to the ground and repeatedly assaulted him — directly to the head. The man was subsequently hospitalized, only to die in a second car crash in February 2013 — which his family believes was caused because of his worsened mental health.

This is not the first time either officer had been accused of such misconduct. Yott had previously been suspended for 60 days this year for needlessly beating a man during an arrest, and Worden was fired just this month for his involvement in the same assault case. In fact, the Tribune notes, of the 26 complaints filed against the Enfield department in the last four years, two-thirds of them have named Worden as the perpetrator.

If you have lost a loved one to what you believe to be wrongful death, contact an accident attorney at The Meyers Law Firm as soon as possible.