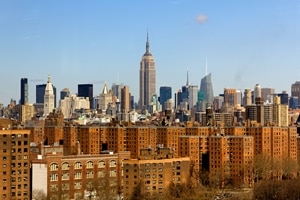 A wrongful death trial is underway after a New York City crane collapse that killed two construction workers in 2008. The victims' families are suing New York Crane and Equipment and the company's owner, James Lomma. They say the crane was damaged in a previous incident, and that Lomma approved a cheap, inadequate fix that triggered the collapse. Lomma was not present at the first day of the trial.

The accident happened six years ago at a high-rise construction site in Manhattan. USA Today reported at the time that part of the crane snapped, crashing into a 23-story apartment building below before falling to the street. Crane operator Donald Leo and construction worker Ramadan Kurtaj were both killed.

The crash happened shortly after a separate crane accident in New York City left seven people dead. The accidents caused the city to take a closer look at crane safety and enact a number of new rules and regulations.

Lomma was acquitted of criminal charges two years ago, but now his family is hoping a jury will hold him accountable in civil court.

"Cranes are not supposed to fall from the sky," Leo family attorney, Bernadette Panzella, told the jury. "James F. Lomma didn't do what he was supposed to do."

The mechanic who oversaw the crane repairs pleaded guilty to criminally negligent homicide.

If you believe you've lost a loved one as the result of negligent behavior on the part of an individual or company in Missouri, you should contact an experienced personal injury attorney as soon as possible. The Kansas City attorneys at Meyers Law Firm can assess your claim and help you recover any civil damages to which you may be entitled.