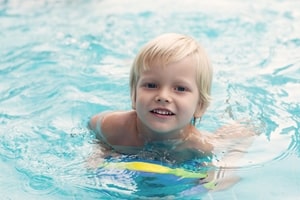 This past June, a 13-year-old boy drowned while attending summer camp at Transylvania University in Lexington, Kentucky. Now the victim's family is filing a wrongful death lawsuit, alleging negligence and unsafe conditions on the school's part.

Local CBS news affiliate WKYT reports the boy had been at the week-long camp with about a dozen other kids. On June 23, according to surveillance footage, the 13-year-old had been swimming in the university's indoor pool — while under lifeguard supervision — when he suddenly began to act distressed in the deep end. That's when the young man drowned — and the lifeguards didn't notice until over 10 minutes later.

"You have a dozen kids in a swimming pool with two lifeguards […] You're talking about a 13-year-old that was not only a great little student but a great little athlete," the family's attorney tells the news station. "The math tells you that nothing should happen."

Although no criminal charges were filed against the school, the boy's parents still allege that negligent lifeguards were responsible for their son's death. The same video that shows the young teen drown also reveals at least one of the lifeguards was clearly distracted, "on her computer, and […] on her phone doing whatever she's doing," according to the lawyer. The family's civil suit names these two lifeguards, along with the camp's counselor and Transylvania University itself, among the defendants.

In addition to both lifeguards being distracted from their duties, the wrongful death complaint also alleges that the pool itself was not set up safely, without any buoys to separate the shallow end from the deep end.

While no amount of financial restitution can ever compensate for this kind of loss, the death of a loved one — especially when caused by the negligence of a third-party — should not go unanswered for. If you believe you have a wrongful death case, meet with the free consultation lawyers of The Meyers Law Firm to discuss your next steps.