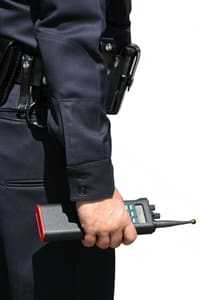 The family of a 24-year-old North Carolina man who was fatally shot by police in September 2013 has filed a wrongful death lawsuit against the officer who fired the gun, the city of Charlotte, Mecklenburg County and Charlotte-Mecklenburg Police Chief Rodney Monroe, reports NBC News.

According to the source, Jonathon Ferrell was driving home at approximately 2 a.m. "when he veered off the road and crashed his car so badly that he had to kick out the rear window to escape." Ferrell then walked half a mile to a nearby residence and knocked on the door seeking help. The woman inside the home purportedly panicked and thought someone was breaking into her home, so she called 911.

The lawsuit alleges that when police arrived, Officer Randall Kerrick fired 12 bullets at Ferrell, 10 of which hit the victim and killed him. Kerrick has since been charged with voluntary manslaughter and placed on unpaid leave.

"This was a murderer who was acting while on duty. Taxpayers were paying him, and he murdered someone," one of the plaintiffs' personal injury lawyers said in an interview with the news outlet. "We all deserve answers. The department needs answers."

Ferrell's family is seeking unspecified monetary damages from the defendants.

If your loved one has died due to another individual's negligent or reckless behavior, it may be in your best interest to file a wrongful death lawsuit. To get this process started, consider finding a personal injury lawyer in Missouri who you can count on to work tirelessly on your behalf. These experienced professionals can assess your claim, try your case in court and help you recover damages to which you may be entitled.