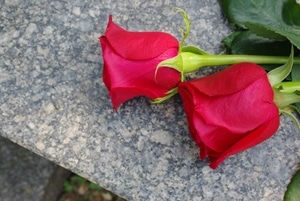 Last week, we shared with you the story of a Kansas City firefighter who, on the night of his wedding, had been shot and killed by an off-duty police officer. In response to his death, the firefighter's widow and parents filed a wrongful death lawsuit against the Kansas City Police Department, alleging that the off-duty officer acted negligently and irresponsibly in both his assessment of the case and his act of shooting the fireman.

While that lawsuit is still ongoing, the deceased firefighter's family has begun exercising peaceful methods of drawing attention to their case. Local news affiliate KCTV-5 reports that the fireman's widow, Stephanie Bruno, has been working to tie red ribbons around trees, fire hydrants and other posts throughout the city as a subtle and tragic reminder of her husband's death. Noting the violence and civil unrest currently happening in Ferguson, Missouri, Bruno hopes that this alternative will serve as a peaceful and effective way of bringing the public's awareness to her family's tragedy.

"It is a peaceful attempt to to get awareness out versus rioting," Bruno tells the source. "I hope they also get awareness of what's going on and realize there is a lack of accountability. I hope they realize it could happen to them – to their brother, son, husband."

Bruno and her family are hopeful that the red ribbon symbols will help facilitate a wave of change and accountability in how police officers exercise lethal force against suspects.

The Bruno family is currently seeking unspecified damages from their case.

If you have lost a loved one in a similar tragedy and believe the negligence or irresponsibility of a police officer is to blame, contact the Kansas City attorneys of The Meyers Law Firm for expert legal representation.