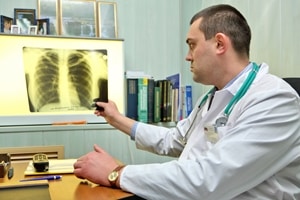 A Nevada man is suing a Las Vegas hospital over the tuberculosis-related deaths of his wife and infant daughters. Rubin White filed the wrongful death lawsuit against Summerlin Hospital, alleging that medical providers' failure to properly diagnose his wife in a timely manner caused her death and the death of their twin girls.

Vanessa White gave birth to Emma and Abigail in the summer of 2013. She had reportedly complained of illness and sought treatment at the hospital, but wasn't accurately diagnosed. White was allowed to visit her babies in the Summerlin Neonatal Intensive Care Unit, not realizing at the time that she was sick with the infectious lung disease tuberculosis (TB). She infected one of her daughters, who later died from the disease. The other infant also died, although she was reportedly not diagnosed with TB.

According to the Southern Nevada Health District, at least 59 other people were infected with latent TB through contact with the hospital. Hundreds of people were tested. Local news affiliate FOX 5 in Las Vegas reports that the Nevada Occupational Safety and Health Administration (OSHA) recently cited Summerlin Hospital for eight violations related to the tuberculosis outbreak, including six serious infractions. Nevada OSHA ordered the hospital to pay more than $39,000 in fines, saying administrators didn't act quickly enough to screen employees for the disease and didn't adequately adjust their TB control plan.

If one of your loved ones has died as a result of negligent medical care in Missouri, you should contact an experienced, aggressive personal injury attorney as soon as possible. The Kansas City attorneys at Meyers Law Firm can assess your claim and help you recover any damages to which you may be entitled.