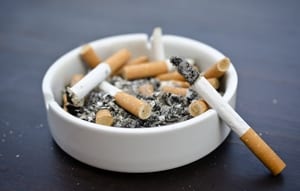 A Florida jury has ordered the second largest cigarette maker in the country to pay $23.6 billion to the widow of a longtime smoker, who died of lung cancer in 1996. According to the Associated Press, Cynthia Robinson was suing R.J. Reynolds Tobacco Company, claiming it was responsible for the wrongful death of her husband. Those punitive damages are in addition to $16.8 million in compensatory damages the jury had already said the company owes Robinson.

This is Florida's largest-ever judgment in a single-plaintiff wrongful death case, a spokesman for Robinson's attorney told Reuters news service. R.J. Reynolds says it will appeal the "runaway verdict." Robinson's legal team, on the other hand, says the judgment is a clear message for the powerful tobacco industry.

"R.J. Reynolds took a calculated risk by manufacturing cigarettes and selling them to consumers without properly informing them of the hazards," attorney Willie Gary told the British Broadcasting Corporation (BBC). "We hope that this verdict will send a message to R.J. Reynolds and other big tobacco companies that will force them to stop putting the lives of innocent people in jeopardy."

According to Reuters, Robinson filed her civil lawsuit in 2008, claiming that R.J. Reynolds was negligent in failing to properly inform consumers of the dangers of regular tobacco use. She says her husband, Michael Johnson, died of lung cancer at the age of 36, after becoming addicted to cigarettes and failing multiple times in his efforts to quit. Family attorneys say Johnson began smoking when he was just 13-years-old.

If you believe that you have lost your loved one because of the negligence or deceit of an American company, you may have the right to seek civil damages. Call the injury attorneys at The Meyers Law Firm to learn more.