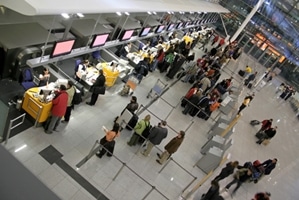 On March 22, a recently installed flight information board at Alabama's Shuttlesworth Airport fell on the Bresette family of Overland Park, Kansas. Four family members were injured in the incident, including 10-year-old Luke Bresette, who lost his life.

The family is now filing a wrongful death lawsuit against the Birmingham-area airport and nine companies that were involved in either the design, building or installation process of the board, according to Kansas NBC affiliate KSN.

The family's attorney told the source, "It's a lengthy complaint in which allegations have been made against various contractors involved in the installation of the electronic board that fell on the family."

After the incident, an airport spokeswoman told the Kansas City Star that officials did not know why the sign fell, and an investigation was underway.

The family's suit charges that a number of modifications, such as material swaps, made the devices much heavier – 300 to 400 pounds, according to the Star. The suit also claims that the base of the units were smaller, making the whole structure top-heavy, and that contractors involved in the construction and installation should have known they were too unstable to be free-standing. It charges the contractors with failure to come up with a viable solution.

If a member of your family dies due to an individual or business's negligence and you live in Missouri, you need to find a lawyer in Kansas City who will aggressively seek justice. These local professionals will try your case in a court of law and help you recover any damages you are entitled to.