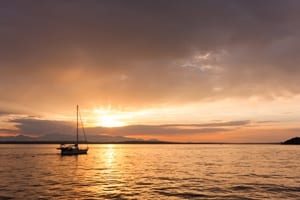 In July of 2012, tragedy struck in the Lake of the Ozarks. Fourteen-year-old Alexandra Anderson and her 8-year-old brother Brayden were electrocuted by a stray current and drowned while swimming off their family's dock. Following the incident, their mother, Angela Anderson, filed a lawsuit against against Ameren Missouri, which owns the lake and operates its Osage Power Plant nearby.

The suit is complicated by Missouri's Recreational Use Act, which incentivizes landowners to allow their property to be used for recreational activities such as hiking, swimming or hunting with protections against lawsuits. However, these protections only apply when the landowner offers these activities for free.

Ameren Missouri charges a permit fee for the placement of a dock at its lake's shoreline, which the Anderson family alleged negates its immunity under the Missouri Recreational Use Act.

"The family had paid a fee to place and use the dock, which is what the Anderson children were doing at the time of their deaths," the case's brief reads.

The Andersons also alleged that Ameren had prior knowledge that many of the docks along the lake did not contain ground fault interruptors, which prevent stray currents from reaching the water.

Ameren's attorneys responded that the Anderson children had not been charged to swim in the lake, which is what they were doing at the time of their death. "Immunity is not lost if a fee is charged for something other than the free use of the recreational area," they contested.

While no court decision can take away the pain of losing a loved one, especially those with so young and with such potential, it can ensure that others do not meet the same tragic fate. The Meyers Law Firm will work tirelessly to win you the damages you deserve.