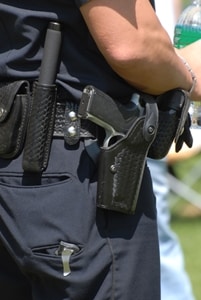 On March 1, 2012, 26-year-old Brandon Dunbar was shot to death by law enforcement officials following a traffic stop that occurred at approximately 2:30 a.m. in Riverside, California. According to The Press-Enterprise, the victim's mother has filed a wrongful death lawsuit against the city, seeking an unspecified amount of damages for her son's death.

The source reports that Dunbar, who was a passenger in the vehicle that police officers had pulled over, ran from the car toward a property near Anna Street and Lincoln Avenue. Law enforcement officials allegedly shot the victim several times "from a position where deadly force was not justified in self-defense or defense of others," states the lawsuit. The police department claimed that Dunbar had been carrying a weapon at the time.

The attorney representing the plaintiff said law enforcement officials allowed the victim to die, indicating that a tourniquet could have been applied to Dunbar's leg to prevent him from bleeding to death.

According to the lawsuit, "All defendants conspired to remove as much physical evidence as possible … by excavating the entire area where [Dunbar] had bled to death, [and by] removing the blood-sodden turf and dirt to an undisclosed location."

If you're a Missouri resident and one of your family members has died as a result of a business or individual's negligent behavior, consider finding a personal injury lawyer who will work hard on your behalf. These experienced and locally based professionals can assess your claim, try your case in court and help you recover damages to which you may be entitled.