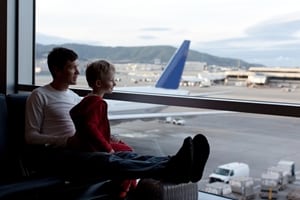 Last year, a flight information sign in Alabama's Birmingham-Shuttlesworth International Airport fell and killed a 10-year-old boy, prompting his family of seven to file a wrongful death lawsuit. A year later, the defendants have agreed to a settlement in the case.

Local news affiliate KMBC-TV 9 reports that the Kansas family had been returning home from a trip to Florida when a falling sign in a section of the airport undergoing renovations crushed the boy. His mother and two of his brothers were also seriously hurt in the accident.

The companies accused in the wrongful death suit took responsibility for the tragedy, pledging to use the family's loss as a way to ensure that information signs are better fastened to their wall and floor supports. While not involved in the lawsuit, the airport also vowed to install a permanent memorial to the little boy and place it on display.

"The individuals who make up the companies involved here are good and decent people who never intended this result," read the boy's father in an official statement. "Nevertheless, mistakes were made and there has now been accountability and repentance. Our family in return extends forgiveness."

According to the news outlet, the judge presiding over the case noted that he had "never seen attorneys work so efficiently to settle a lawsuit and admit wrongdoing." The final figure of the settlement was not released.

No matter what the circumstances, losing a child is always a tragedy. If your family has suffered such a loss and you believe another party is at fault, contact the Kansas City attorneys of The Meyers Law Firm as soon as possible. Our team of injury attorneys will work tirelessly to help you receive any damages you may be entitled to.