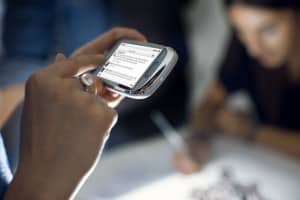 Countless people in Missouri and throughout the country have an obsession – smartphones. Stand on any street corner in Kansas City and you will no doubt see individuals with their eyes glued to their devices instead of the ground in front of them. On foot, this habit doesn't do much damage, but on the road, that's another matter.

In 2009, the Traffic Safety Association reported that distracted driving accidents resulted in 5,400 deaths and 448,000 injuries. Now, more and more Kansas City attorneys are seeing personal injury cases that involve iPhones and other devices.

And that trend isn't likely to change, given the recent findings of the Centers for Disease Control and Prevention (DCP). The Associated Press reports that 15,000 high school students took part in a DCP study on distracted driving habits. A substantial 58 percent of seniors and 43 percent of juniors admitted to sending text messages or emails while behind the wheel.

Teen drivers already have a reputation for dangerous driving due largely to their lack of experience on the road, but this new figure provides another cause for concern. According to the media outlet, 39 states already have universal laws banning texting while driving, while five more ban "novice drivers" from doing so. Currently, Missouri general assembly has no such legislation in place.

But, unfortunately, the study indicates that teenagers are continuing to do so despite state laws. Meanwhile, tech companies have already begun developing apps to try and combat the habit by silencing phones that are traveling at certain speeds, but the source notes that most of these programs are unable to distinguish passengers from drivers.

Residents of Missouri who have recently been in a car accident caused in part by distracted driving should consult a personal injury lawyer in Kansas City to review their case.