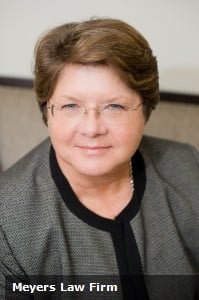 We are saddened to share that our colleague and good friend, Suzanne Loseke Meyers, passed away on Wednesday, September 10, at age 60, after a hard and bravely-fought year with breast cancer. Sue left us with her family and loved ones by her side to the end.

A native of Columbus, Nebraska, Suzanne graduated as valedictorian of her high school class before moving onto the University of Nebraska College of Law, where she earned her law degree with distinction in 1979 alongside a Bachelor's of Science in Agriculture Honors/Food Science and Technology.

Suzanne moved to Kansas City in 1979, where she worked as one of the first female attorneys for Shughart, Thomson & Kilroy, specializing in construction litigation. During this time, Sue met and married her husband, Martin Mark Meyers, and retired in 1985 after giving birth to their first child. While Sue loved raising their four children together, she decided to return to law – first part-time, then full-time – with The Meyers Law Firm in 1993. Her practice areas with Meyers included personal injury, wrongful death, professional negligence and employment discrimination.

Sue's courage, determination and faith – whether in the face of cancer, fighting for her clients or just around the house and office – will be sorely missed by those who knew and loved her.