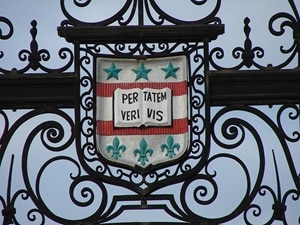 Washington University in St. Louis, Missouri, is the subject of a new lawsuit that alleges the school is responsible for conditions contributing to a student's death.

The St. Louis Post-Dispatch reports that on October 26, 2013, a 22-year-old Washington University student died after falling from a 23-story high-rise apartment. While the death was initially ruled a suicide, this claim was revised just last month as undetermined but potentially caused by an LSD drug trip. In their wrongful death complaint, the student's family accuses the school for its lax response to on-campus drug use, which, had it been more stringent, may have potentially saved their son from taking LSD and falling to his death.

The bulk of the complaint is aimed at the Phi Chapter of the Sigma Alpha Mu fraternity ("SAM House"), which has repeatedly brushed with campus law for a number of issues, including hazing in 1999 and a criminal drug investigation in 2008. However, instead of being turned over to authorities for criminal prosecution, many of SAM House's drug offenders were placed on university probation instead — allowing them, the family argues, to continue to influence students like the 22-year-old victim.

"Despite the SAM House's significant criminal history and ongoing criminal conduct, the university took no action to [cut] ties with those students or refer them to state or federal prosecutors," the lawsuit claims. "This enabled the university to preserve and maintain the integrity of the public perception."

The family initially asked for a settlement of $50 million but the university refused to settle. The new amount of damages that the victim's family is now asking for was not disclosed.

No amount of money can ever compensate for the loss of a loved one, but if you believe the death of a family member is in part due to the negligence or culpability of a third-party, contact The Meyers Law Firm right away. Our expert Kansas City attorneys can assess your wrongful death claim and fight for any restitution you might be owed.