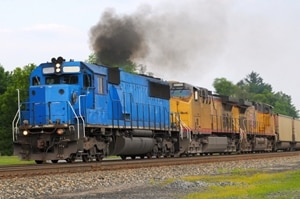 Mary Tanfield's husband, Harold, spent over 35 years working for the Consolidated Rail Corp. (Conrail), breathing in toxic diesel fumes from the company's trains due to a lack of protective masks and other safety gear that his employer did not provide. When Harold Tanfield developed terminal lung cancer and died from the disease in September 2008, his wife filed a wrongful death lawsuit against Conrail, alleging the company is to blame for fostering her late husband's fatal condition. Although a trial judge dismissed the case, the lawsuit has been given a second chance at an appellate court in New Jersey.

According to local news source The New Jersey Law Journal, one of Harold Tanfield's former co-workers had testified that the older model trains they worked on produced high levels of exhaust into the locomotive's cabin. A Harvard Medical School pathologist, Steven Tahan, added that exposure to these fumes — exacerbated by a lack of protective equipment — led to Tanfield's development of lung cancer. The initial judge hearing the case, however, tossed out the suit, stating that Tahan's report couldn't be taken as an adequate assessment because his background is in pathology, not railroad safety.

But on August 11, the New Jersey appeals court revived Mary Tanfield's lawsuit, believing that the alleged link between the diesel emission output of Conrail's trains and Harold Tanfield's lung cancer was justified.

"Based on [his] long-term and seemingly continuous exposure to diesel fumes […] there is a reasonable basis in the record for a jury to conclude that the defendant failed to protect the decedent from the ingestion of such hazardous substances," said the court.

If you have lost a loved one to what you believe was negligence on the part of an employer, seek out the legal counsel The Meyers Law Firm's free consultation lawyers today.