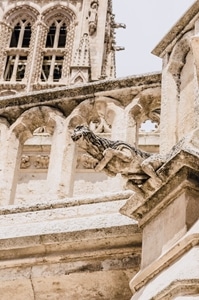 The family of a Chicago woman has filed a wrongful death lawsuit against the Second Presbyterian Church of Chicago after a stone fell on and killed the victim.

Local news affiliate FOX 32 reports that the 34-year-old woman had been leaving the church with her boyfriend and nine-year-old son when a piece of a gargoyle statue perched on the building fell away and landed on her. According to the source, the historic church had not yet undergone a city inspection this year, though it passed inspections conducted in 2012 and 2013. A structural engineering report filed in 2011 found that the church exhibited some "problems that needed to be fixed, but no 'imminently hazardous conditions.'"

Following the accident, the church posted this official statement on its website:

"The Session and Congregation of Second Presbyterian Church express our deep sorrow [for the victim], who died tragically as a result of an incident that occurred in front of the church at noon on Thursday [September 4]. We send our heartfelt sympathy and continual prayers for her family and friends."

The woman's boyfriend has levied a wrongful death suit against the church and is seeking $100,000 in damages. The 34-year-old victim is survived by her two children.

If you ever lose a loved one to a freak accident like this, don't chalk it up to simple misfortune, particularly if you believe another party may be to blame. Although no amount of money can ever compensate for the loss of a close friend or family member, an accident attorney from The Meyers Law Firm can help try your case in court and fight for any restitution you may deserve.