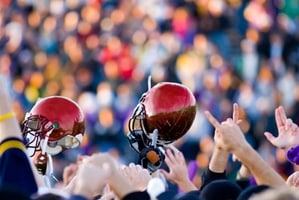 Earlier this year, University of California, Berkeley (UCB) football player Ted Agu died after a supervised training run during practice. Now his family has filed a wrongful death lawsuit against the school, alleging negligence on the part of the coaching staff.

ESPN reports that on February 7, the 21-year-old Agu had been running with his teammates near Memorial Stadium but was having difficulty finishing. When the team's training staff noticed that Agu was struggling, the young man was pulled from the run and driven by cart to the stadium's medical facility. According to team physician Casey Batten, Agu had been awake and lucid at first, talking and hydrating, until he suddenly collapsed at 7 a.m. After administering CPR, the trainers promptly sent Agu to Alta Bates Summit Medical Center, but was later pronounced dead.

According to a press release issued by the family's lawyers, the UCB coaches and trainers were late in recognizing and acting on health problems that Agu had exhibited during the practice run.

"During the course of the conditioning drill, Agu experienced dizziness, shortness of breath, loss of balance and other signs of extreme fatigue that were clearly symptomatic of the sickling process," said the Agu family's lawyers, in an official statement. "Despite the symptoms which clearly could and should have been observed, UCB coaches and trainers failed to immediately come to Agu's assistance. It was only after Agu struggled and encountered obvious difficulties for a significant period of time that intervention occurred and he was placed on a cart and taken back towards the stadium, where he collapsed for the last time."

Agu was entering his final season of football this year as a fifth-year senior.

Losing a loved one is always a tragedy, but if you believe it is the result of negligence on the part of a school or university, it's imperative to seek out proper legal representation from the Kansas City attorneys of The Meyers Law Firm.