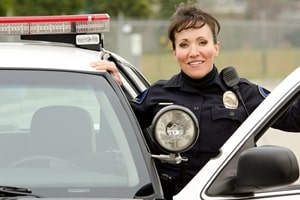 A trio of female officers with the Salt Lake City Police Department have launched a lawsuit against the city, accusing the department's former Internal Affairs deputy chief of sexual harassment.

Local news publication The Salt Lake Tribune reports that the deputy chief, Rick Findlay, had allegedly taken the phone of one of the officers, Lt. Melody Gray, without her permission and copied her photos onto his own phone. One of these included a picture of Gray and Sgt. Robin Heiden wearing bikinis.

"Over the course of the next two years, without her permission and without her knowledge, Deputy Chief Findlay showed the photographs of Lt. Gray to numerous people," the lawsuit claims. "This caused her great embarrassment and diminished her reputation and her effectiveness as an officer in command position."

In addition to passing around Gray's photos, Findlay is also accused of falsely claiming to have a relationship with Heiden. Findlay attempted to pursue a real relationship with Heiden but was rejected by her, allegedly influencing his decision not to promote Heiden to lieutenant. Findlay is also accused of showing others a purportedly nude photo of a third officer, Tiffany Commagere, who claims that such a picture doesn't even exist.

When Gray complained to department chief Chris Burbank about Findlay's behavior, she immediately became the subject of a disciplinary hearing brought about by Findlay, prompting her resignation in August 2012. She had been with the Salt Lake City police department for 18 years. The other two officers were discouraged from filing complaints because Findlay held such a position of authority within the department and any such complaints would have had to go through him in the first place.

While Findlay was finally put on leave for investigation in November 2013, the plaintiffs accuse the city of delaying action against him and not handling their accusations "in the ordinary course of such complaints" in order to allow Findlay to retire last year. Although Findlay was found by the Salt Lake City Civilian Review Board to have committed sexual harassment and "conduct unbecoming of an officer," it was not enough to merit a termination. Instead, Findlay was allowed to resign last June.

According to the officers' attorney, because the city's time to respond to their sexual harassment complaints — which had been logged with Salt Lake City's Department of Human Resources — has elapsed, the three are moving ahead with their lawsuit. Gray hopes their lawsuit will raise awareness about the need to have complaints such as these be investigated by outside agencies rather than interdepartmental authorities, especially when they're the ones being accused in the first place.

If you've suffered gender-based harassment in the workplace, submit your case to The Meyers Law Firm. Our attorneys will review your claim, determine any next steps for legal action and fight for any damages you may be entitled to.