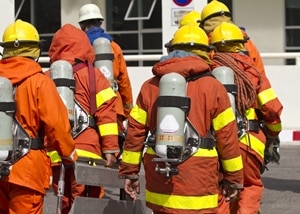 An upstate New York firefighter is suing the city of Schenectady on charges of sexual harassment in the workplace, death threats and being allegedly passed over for less-qualified male colleagues for promotions.

The Times Union, a local news publication, reports that Jennifer Costa had worked as a firefighter and paramedic for 14 years before being put on an "informal leave of absence" last February. According to Costa's lawsuit, the leave was sparked by a death threat in the form of a "drawing of a face with a bullet in its head [that] was placed in her boot at the fire station." Costa had been the recipient of a similar threat in 2011, but Deputy Chief Ray Senecal — now Chief of the fire station — had dismissed it as simply of a case of "boys will be boys" and advised Costa to not "let these guys get to you."

The lawsuit, which was filed last month on December 26, contends that the fire department lacks a sexual harassment policy and even separate bunks, showers and bathrooms for female firefighters. In one instance of sexual harassment, Costa's complaint identifies a male lieutenant within the department exhibiting a romantic interest in Costa. When she rebuffed his advances, "the lieutenant began sexually harassing her by making lewd sexual remarks in her presence," the Times Union writes.

When Costa reported the harassment in January 2014, three of her male supervisors reportedly "intimidated" her in retaliation, in an effort to allegedly "drive [Costa] out" of the department.

If you have been the target of discrimination or harassment at work, reach out to The Meyers Law Firm right away. Our expert attorneys can handle your case with care and fight for any compensation you deserve.