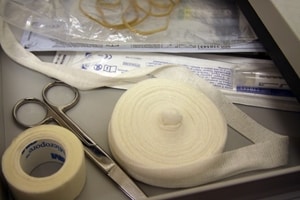 A New York female gynecologist has been named as the defendant in a sexual harassment lawsuit after a former employee said the doctor made advances toward her despite the fact that it was obvious the plaintiff was not romantically interested. Janine Mancuso, who used to work as the clinic's office manager, filed the complaint against Dr. Susan Malley at the end of February in U.S. District Court in White Plains. According to online sources, Mancuso had been working at the medical center for almost one year when Malley's inappropriate behavior started.

The plaintiff alleged that the harassment began when Malley started rubbing the former staff member's arms for an extended period of time. The doctor, who is a mother of three, also reportedly asked Mancuso out on dates and questioned if she wanted to have a "girls' night." When she complained to the managers at Westchester Health Associates, where both women were employed, Malley allegedly broke into the office one day and smashed a framed picture of the plaintiff.

Because of these incidents, Mancuso said that she was so traumatized that she was forced to take a leave of absence. She left in August and has not returned since. Her lawsuit declares that Malley's behavior made it unbearable to stay employed at the clinic. It is unclear how much money the plaintiff is seeking.

If you live in Missouri and have been the victim of sexual harassment, then what are you waiting for? Consider scheduling a consultation with a lawyer in Kansas City  who will work hard on your behalf. These experienced and locally based professionals can assess your claim, try your case and help you collect damages you may be entitled to.