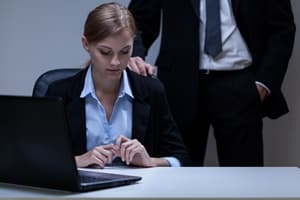 While many businesses over the past few years have made improvements in the processes related to the reporting of harassment in the workplace, there is still a long way to go: In 2014, 62 percent of all harassment claims were attributed to retaliation made against employees who reported harassment or unfair practices. This shows a fundamental issue that inhibits the reporting of appropriate complaints.

"Harassment training has been emphasized by organizations like the EEOC."

"We wouldn't have 62 percent retaliation claims nationwide if everyone was doing what they were supposed to be doing," says Tracee Comstock, Salt Lake Society of Human Resource Management 2015 president. "We need to create an open-door policy where employees can discuss any type of situation without fear of ridicule, retaliation or reprisals."

An example of this took place in 2015 when two potato packing plants owned by Smokin' Spuds and Farming Technology in Colorado were ordered to pay $450,000 to settle an EEOC lawsuit accusing the companies of retaliation and harassment. Twelve women complained that they had been subjected verbal sexual harassment and unwelcome physical contact in the plants and after filing a complaint, the company fired three of the women for making reports to management officials.

Training has been emphasized by organizations like the EEOC, saying plainly that companies can save themselves from potential litigation and retaliation claims if employees are trained to identify the signs of harassment.

"Have a third-party employment attorney handle that," Comstock said, according to Utah Business Magazine. "No matter how small or large your company is, you always need to do your anti-harassment training with managers yearly, maybe even every six months."

If you have been the victim of harassment or retaliation by your employer, contact The Meyers Law Firm today.