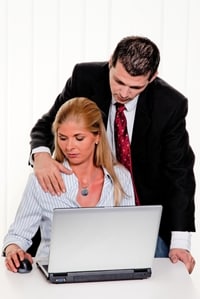 Kathy, a Minnesota resident and Det-Tronics employee, is suing the company for alleged sexual harassment at the hands of a man who sat next to her on the assembly line.

In reports, Kathy, who asked that her last name not be revealed, relayed instances of daily abuse including unwanted touching, hair pulling and groping. She claims she didn't report him at first because she was only a temp and didn't want to lose her job.

After months of abuse though, she reported his behavior in detail to her supervisors. Kathy claims that they in turn did nothing. One manager asked her to give the man a second chance.

Another supervisor saw the man harass two other women and reported him.

Kathy's employment law attorney claims it took the human resources department 11 months to separate the man from her. He still works there now.

Det-Tronics released a statement on the situation: "We take employee concerns very seriously and expect all employees to treat one another with respect."

The lawsuit is currently being pursued. Kathy hopes that in telling her story, others will also come forward and tell theirs.

Sexual harassment has no place in a work environment and can create a stressful, unsafe work area for both the victim and those around him or her.

If you believe you have been a victim of sexual harassment at work and fear retaliation or the loss of your job for reporting it, schedule an appointment with The Meyers Law Firm. Our team of attorneys in Missouri can help you assess your claim, explore your options and decide what steps you would like to take in the future. We will help you fight for any compensation you may be entitled to.