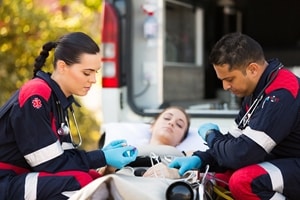 A federal jury just found that an Indianapolis paramedic was wrongfully terminated by the Wayne Township Fire Department of Indiana after her employer discriminated against her for having diabetes.

Kristine Rednour was diagnosed with Type 1 diabetes when she was 12 years old, and was first hired by the fire department as a reserve paramedic back in early 2009. Several months later, she was promoted to a full-time position, which she held until late 2011, when she was fired over her health. While on the job, Rednour had two incidents where her blood sugar dropped: once when she was driving, and another while caring for a patient. In both situations, she drank orange juice and was able to quickly return her insulin to a safe level.

Following the second incident, however, her partner told her he was no longer comfortable working with her, and when Rednour told her supervisors about the event, she was placed on leave while they investigated it further. Ultimately, while the department's staff doctor cleared Rednour's return for limited duties (she wouldn't be allowed to drive any department vehicles until her insulin doses were properly adjusted) the department's deputy chief had further questions on the disease, and ultimately fired Rednour. He claimed claimed that according to his research, someone with Type 1 diabetes should never have been hired by the department to begin with, and that Rednour "must have fallen through the cracks."

Rednour sought lost wages and damages owed to emotional distress, and the jury for her trial found her entitled to $123,500 in wages and $100,000 in general damages.

Since being fired, Rednour successfully adjusted her insulin dosage to her doctor's recommendation, and hasn't had a single issue over the past four years. She has found successful long-term employment working as an emergency room paramedic at St. Vincent Hospital in Indianapolis.

The most important takeaway from the trial, says Rednour's attorney, is that people with disabilities and their employers owe it to each other to keep an active dialogue going on the subject of reasonable accommodation, and that if they do that, it'll be easy to find cheap and effective ways to retain employment and leave all involved parties satisfied.

Discrimination in the workplace is a serious issue. If you believe you've been treated unfairly because of a disability or other issue, submit your claim to the workplace discrimination attorneys here at The Meyers Law Firm. Our staff will review your case and help you determine your best course of action.