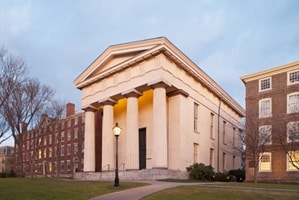 Paul Thomas, the former director of the Providence, Rhode Island Department of Public Works, just filed a lawsuit against the city and its once mayor, Angel Taveras, for firing him back in 2012.

According to the lawsuit, Thomas was terminated after refusing to cooperate with the Taveras administration's orders that he hire unqualified individuals solely "because of their ethnic backgrounds," adding that he specifically was told to ignore "several qualified applicants of a different ethnic background" in order to fill ethnic quotas.

Among the defendants named by the lawsuit are the city, current Mayor Jorge Elorza, Finance Director Lawrence Mancini, Director of Human Resources Sybil Bailey, City Council President Luis Aponte and Tavares. Thomas seeks damages as well as a reinstatement to his prior post.

He was first hired as Providence's public works director in 2009, following nine years in an equivalent position at West Warwick. In 2011, Taveras was elected and began pushing for Thomas to hire and/or promote at least two unqualified individuals.

On top of the claims that Taveras' administration violated a statewide policy forbidding discriminatory hiring practices, the suit also alleges that the city used a medical condition as grounds for his firing. Specifically, Providence's director of human resources contacted Thomas demanding a meeting the following day on the subject of overtime which Thomas, ill at the time, was unable to attend. His lawyers argue that using this as grounds for termination would pave the way for employers and the state to discriminate against workers because of health issues.