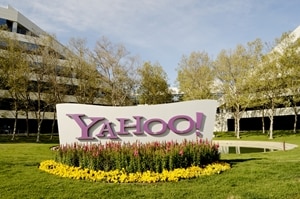 A recently filed lawsuit against tech giant Yahoo accuses company managers — including current CEO Marissa Mayer — of taking advantage of quarterly performance reviews to unfairly inject "subjective biases and personal opinions" in determining the promotion or termination of employees based on "actual and intentional gender-based discrimination." In an unexpected twist, the suit has been filed by a male former employee alleging that he was discriminated against for his gender, claiming that Yahoo gave preferential treatment to female employees.

"The suit has been filed by a male former employee alleging that he was discriminated against for his gender."

Gregory Anderson — editorial director of Yahoo's Autos, Homes, Shopping, Small Business, and Travel sections until his termination in 2014 — claims that between 2012 and 2015, Yahoo reduced its work force by more than 30 percent to try and remain afloat amidst tanking profits. Anderson claims that he was singled out when he took a Journalism Fellowship at the University of Michigan, which two top level Yahoo executives signed off on, and given an unfairly poor QPR that resulted in his termination.

Anderson further stated that Chief Marketing Officer Kathy Savitt unfairly favored female workers when it came to promotions and terminations, to the point where Yahoo's top managers went from being 20 percent female when she began to current levels of 80 percent.

"Savitt has publicly expressed support for increasing the number of women in media and has intentionally hired and promoted women because of their gender, while terminating, demoting or laying off male employees because of their gender," writes Anderson's lawyer. "This manipulation of the QPR process permitted employment decisions, including terminations, to be made on the basis of personal biases and stereotyping."

If you have been the victim of unfair treatment due to managerial bias, The Meyers Law Firm is here to help.