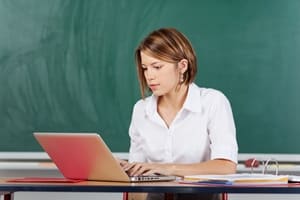 Thirteen current and former teachers have filed a lawsuit against the Long Island-based Riverhead Charter School (RCS) and its principal, Raymond Ankrum. The claim accused Ankrum and the school of committing racial, gender, age, religious, and disability discrimination, as well as wrongfully terminating several employees.

The administration's behavior went as far as open sexual harassment, with Ankrum allegedly demanding that teachers wear seductive clothing. In a statement from the teachers' attorney, "We have tweets from the principal stating that, 'If you were wearing a skirt below your knees you're dressing like a nun.'"

The claim argues that Ankrum used this discrimination as a means of targeting older Caucasian women and ousting them from their positions. "Mr. Ankrum is an African-American male, known to be intelligent, calculated, and perpetrating an ostensibly noble agenda of improving minority education at RCS. In reality," it adds, the principal's "agenda was the product of his racist, ageist, sexist, and other discriminatory beliefs."

Eight of the thirteen plaintiffs were terminated while Ankrum was principal, one of the others resigned, another was demoted to half time teaching, one's contract wasn't renewed and two others are still teaching. The lawsuit seeks $10 million in damages, as well as reinstatement of all of the teachers fired during Ankrum's tenure.