Oregon woman fired for taking too many bathroom breaks while pregnant 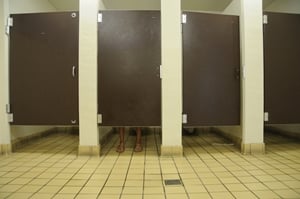 A Portland, Oregon, woman has filed a wrongful termination lawsuit against her previous employer, alleging that she was fired from her job for using the restroom too often during her pregnancy while on the clock.

The Kansas City Star reports that Dawn Steckmann used to work for the high-tech company Maxim Integrated Products, which manufactures wireless device wafers for the Portland suburb Beaverton. According to her complaint, "when Steckmann was pregnant with her first child in 2011, she asked a supervisor whether she should go off the clock because she was urinating more frequently and was told that wasn't necessary."

But then when she became pregnant again in 2013, a bladder condition caused these bathroom breaks to become even more frequent — so much so that she reportedly wouldn't even have had time to physically clock out before going to the restroom if she wanted to avoid an accident, the lawsuit states.

Then in June of last year, Steckmann's supervisor and human resources manager called her into a meeting to ask why she wasn't clocking out for her trips to the bathroom. Contrary to what Steckmann says she was told previously, her supervisor now said that she had to take herself off the clock for each trip, which ultimately led to her removal from the company.

Now, Steckmann is seeking $406,000 in damages for lost wages and benefits, emotional distress and damage to her professional reputation. The lawsuit is also seeking for Steckmann to be reinstated to her previous job as a fabrication technician, at a pay rate of $18.76/hour.

If you believe you have been unfairly let go from your job and seek compensation for your losses, reach out to the wrongful termination lawyers of The Meyers Law Firm right away for expert, Kansas City-based legal representation.